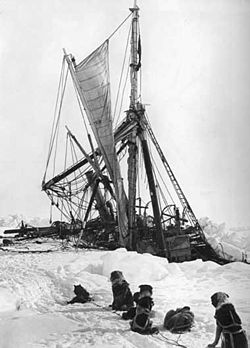 Whether Shackleton’s famous ad in the London Times is real or myth, any true polar adventure includes stories of hardship and of ships beset by ice. And the story of Shackleton’s ‘Imperial Trans-Antarctic Expedition 1914–17’ (the Endurance expedition), which ends with the loss of ships but the safe return of the entire crew after an almost unimaginably heroic effort, is truly one of the greatest stories of polar history.

‘By endurance we conquer’

Throughout history, many ships have been lost in the early attempts to explore polar regions or in risky attempts to come to the aid of other expeditions. In modern history, too, pack and pressure ice have so impeded passage that crews had to be abandoned on the ice.

Ice is beyond anyone’s control. It can seem like a living, creeping organism, seizing the ship in a deadly grip. In the vast nothingness of ice, from a distance the scene may look almost serene, but for those on board, the experience of the ice closing in around the hull, causing it to shriek and creak, can be nerve-racking and unbearable. Like a fingernail on a blackboard. Crew and passengers are utterly powerless.

Nella was no icebreaker – and her 2200 horsepower hardly gave her the strength to push off more than 1.5-metre-thick ice, but she was built to twist and turn as she danced with the solid white sea. Over the years, skilled ice skippers, ship’s mates and crews grew increasingly adept at reading the movements of the ice and slipping through from pocket to pocket of open water.

Sometimes, still, their luck ran out; every opening closed up, and the ship was stuck. When the indomitable little red fox found itself with no way out, the only option was to hunker down and prepare.

Once the ice began to close in around the ship, she was pushed up from bow to stern. The pressure on the hull could be tremendous, and the pressure ice screeched up the sides of the ship, breaking off far above the ice surface. Often creeping up slowly, but sometimes moving as fast as 1 metre every 10 seconds. Sometimes, subsequent inspections found that the steel hull had dented under the pressure. But all in all, she withstood the onslaught, year after year.

As the pressure increased, Nella popped up like a cork, thanks to the rounded hull. Bow raised high, propeller in the water.

And there she sat.

Everyday life on board changed. Being beset could mean a welcome respite from established routines, and a ladder leading down to the ice was quickly set up. Quite a few South Pole Cups and national soccer matches have taken place on the ice.

On those occasions when the ice did not let up, the ship eventually required assistance. Thus, Nella Dan still holds the Australian record, being beset for seven weeks in the 1985/86 season after making it almost all the way to Amundsen Bay at 67 degrees south on her first trip of the season, before the ice seized hold of the ship and refused to let go.

The Japanese ice breaker Shirase eventually liberated Nella Dan. Over time, this and other incidents have been documented on film and in photos, articles and stories.

In the 1985/ 86 season, Nella Dan was beset in Amundsen Bay east of the Russian station Molodezhnaya. After seven weeks, the Japanese ice breaker Shirase (AGB-5002) broke through the 4-metre thick pack ice and came to Nella Dan’s rescue.

(Click here to see Greg Young’s film from the rescue)

In the 1966/67 season, Nella Dan was trapped in the ice for three to four weeks until the ice breaker Westwind (WAGB-281) of the American coastguard came to Nella Dan’s rescue.

(Click here to see John Gillies’s film from 1967, when he shot film for Phil Law)

Nella Dan arrived to the station in Casey early in the morning on Sunday, 4 January 1987 on her fifth trip that season. That same night she departed for Edgeworth David. The very next day, Nella ran into heavy pack ice, and after a few days’ hard struggle, the ice closed in on her.